On the night of Sunday October 5th – a national holiday for the Feast of the Sacrifice, Eid al-Adha, celebrated on Saturday - armed clashes rocked areas of the Bekaa valley, located in the east of the country near the border with Syria. Members of the Nusra Front – affiliate of Al Qaeda in Syria - attacked Hezbollah positions in the mountains surrounding the area, with a toll of nearly twenty dead. The event has naturally caught the attention of the local and international press, overshadowing perhaps the other big news of the day (a violation of the security of the Blue Line, guarded by UNIFIL on the border with Israel), and represents another addition to ongoing concerns over the current and future security situation.

The Bekaa valley. Behind the mountains, Syria

Such events are unfortunately not infrequent to Lebanon this year; the country suffers the consequences of a conflict that is engulfing the entire region. Last August, for instance, members of this group along with the Islamic State (ISIS, here also called Daesh) attacked the village of Aarsal, located on the Syrian border close to yesterday’s clashes. In a battle that lasted days they were confronted by the Lebanese Armed Forces, which lost more than ten personnel while twelve others were kidnapped. The families of the kidnapped soldiers make daily requests for actions to be taken to recover their loved ones (just this Sunday the route to the East was cut); ISIS has already killed three of them.

Laboue and Brital – two of the villages in which these events were carried out - are en route to and within walking distance from one of the most popular spots in Lebanon: Baalbek, the city that hosts one of the world's best preserved Roman sanctuaries. A world heritage site, the dangers posed by the proximity of groups like Daesh/ISIS has been frightening tourism away for months.

We had the opportunity to get an impression of the environment, as just that Sunday we headed east, intending to go to the Bekaa Valley to see the area first hand. Getting there takes about two hours from Beirut; along the 80 kilometer stretch from the capital to Baalbek we passed through eight military checkpoints that search every vehicle and its occupants, and once in the city itself a Hezbollah checkpoint was added to this.

Very few people circulated around Baalbek and even fewer were at its splendid ruins: as a local told us, the situation has become very difficult for residents of the area, which have lost their main source of income. The tension over security could be felt in an environment in which everyone was observant and attentive to the smallest signs that the danger could be approaching. 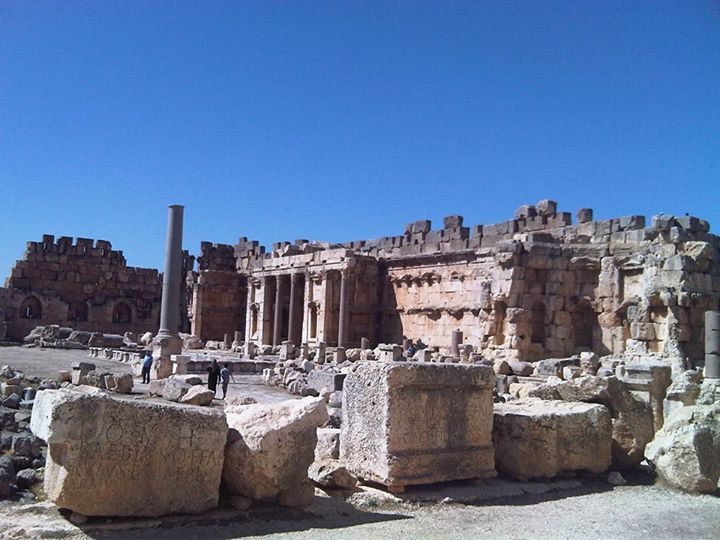 The solitary ruins of Baalbek.

But just thirty miles south out of the Bekaa and it seemed like a typical Sunday. Families eating lunch, incessant traffic – typical of Lebanon - and the autumn sun on the fields. It was a postcard picture of the naturalization of the violence, the scourge that seems to anesthetize us and to which we adapt as it becomes such a daily occurrence. This naturalization is a tragic one, yet by marking the limits to which the fear can reach us, it represents hope.