Peace Operations: Views from the South 15 Years on from Resolution 1325 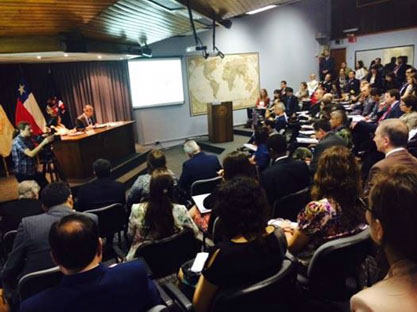 ‘Peace Operations: Views from the South 15 Years on from Resolution 1325’ - is the name of the International Conference that took place in Santiago, Chile, organised by RESDAL - Latin American Security and Defence Network, under the auspices of the Ministry of National Defence of Chile.

As publicised, President Michelle Bachelet provided a welcome at the event’s opening in an audio-visual message to experts working on a topic that the Chilean president herself has been advancing in various international forums, and which has highlighted Chile as an advanced country at the regional level.

The conference marked the first international discussion among the defence sector in the framework of the 15th anniversary of Resolution 1325, as a contribution to the process established by the Security Council for 2015. Furthermore, it sought to open up South-South dialogue for an exchange among defence representatives on peacekeeping, opportunities for cooperation and participation in shaping the current and future design of peace missions.

It took place at a moment in which the Secretary General of the United Nations has announced the formation of a high-level group to engage in an exhaustive review of peacekeeping operations and in which the United Nations Security Council is engaging in a comprehensive review of one of the central Security Council resolutions on women, peace and security: Resolution 1325 of the year 2000. Both review processes converge in 2015, when the results will be announced, and the conference was a crucial activity for Latin American influence in these processes.

The objective of this international conference is to gather the impressions of countries contributing to international peace missions on the future of peacekeeping and its relation to gender in building a lasting future peace. Participants represent an important part of the current contribution of troops to peacekeeping missions. Their results will contribute to these review processes while collaborating in the evaluation processes that the contributing countries themselves will engage in in the near future.

RESDAL - Latin American Security and Defence Network, was able to carry out this event due to the support of the Norwegian Agency for Development Cooperation (Norad). 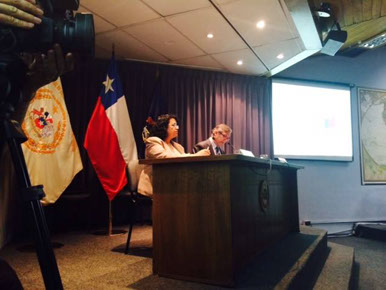 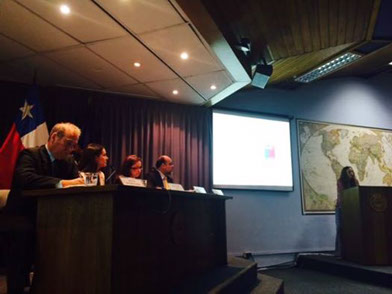 The opening of the International Conference “Peace Operations, views from the South 15 years on from Resolution 1325” was made by Marcos Robledo, Subsecretary of Defence, Ministry of National Defence of Chile, and Marcela Donadio, Executive Secretary of RESDAL. 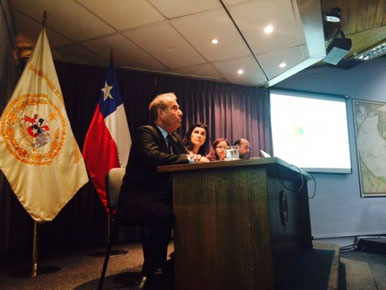 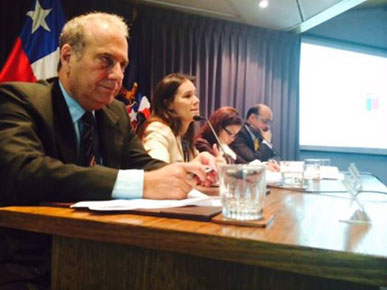 Hal Klepak, of the Royal Military College of Canada, Advisor to the Commander of the Canadian Armed Forces and member of RESDAL's Executive Committee, presented an analysis of the current international security context.

Pamela Villalobos (CEPAL) offered a general overview of gender policies across Latin America and their relation to Resolution 1325.

Miguel Navarro, of the Academy of National Political and Strategic Studies, began his presentation in the first panel of the conference by referencing that the “end of History”, as stated by Fukuyama in 1992, had not occurred. “History continues. The great powers continue developing power strategies that have little difference from those developed during the Cold War”.

His presentation focused on the role played by middle powers. In this sense, he asked: “where are they”. Navarro explained that it is the middle powers who are most affected by the avatars of the international system and that at the same time their capacity to influence international security is very much reduced. “They have a much greater interest in maintaining peace and international stability”.

He then introduced the Chilean case. “Chile is a country that has developed an open policy towards the world. An international conflict complicates the free circulation of goods, and Chile experimented this during the First and Second World Wars, not participating in either. Now, the interest in peace and security is vital. Middle powers have a particularly strong interest in maintaining peace.” 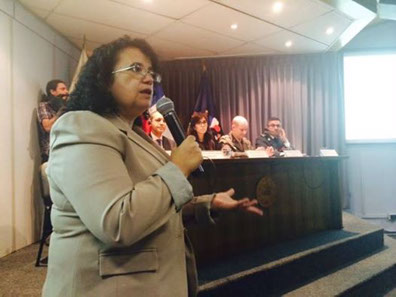 The first panel ended with the voice of Mexico, presented by Ifigenia Argueta Sánchez, of the Secretary of Foreign Affairs. Argueta expressed Mexico's will to join Peace Operations, even though she highlighted that Mexico's participation would be in accordance with her country's foreign policies, evaluating on a case-by-case basis the way in which such participation will take place

The second panel, "New forms of peacekeeping and stabilisation? The issues that impact and will impact missions, with elements of security and gender taken from current cases in the Middle East and Africa", was presented by Marcela Donadio, who highlighted the vocation of provoker of this instance.

"Women are not cattle. Stop counting our heads and start giving us power”; that is how Carina Perelli, of Silverkrieg, opened up the second panel and started her analysis of the current situation of peace operations and Resolution 1325 in a context in which violence has transformed itself and is transborder in nature.

Perelli also mentioned the role of the Internet in this new situation: “the internet becomes a new theater, a stage for war. Internet is used to recruit, to spread ideas and to provoke the great powers. This is the current context. It is a context of weakened states, and in which there are non-governmental actors that are on a par”.

The Department of Peacekeeping Operations (DPKO) was also present at the second panel through Micaela Martinet-Rojas, as commenter.

Brigadier General George Melhem of the Lebanese Armed Forces presented an analysis of the current situation of United Nations peace operations from the perspective of his country's concrete situation. 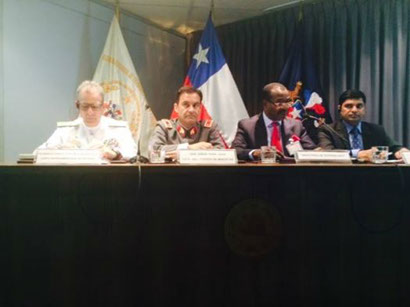 “The concept of impartiality is facing its worst moment for the United Nations. The problem is that in many countries where there are peace operations deployed today, it is perceived that they, themselves, are part of the very conflict”, concluded Colonel José Ricardo Vendramin Nunes, Director of CCOPAB, Brazil

The third panel focused on the future of Haiti. Under the title “What are we doing? Reflections on participation in missions and preparations for them. Haiti and MINUSTAH towards 2015. The initial presentations to trigger the debate were led by Major Marc Kernizan, Ministry of Defence of Haiti, and General Jorge Peña Leiva, MINUSTAH Deputy Force Commander.

General Jorge Peña Leiva, MINUSTAH Deputy Force Commander, explained that “we have a mandate that obligates us to support the Haitian government to create a safe environment”. Peña Leiva informed those present that in March 2015 the United Nations Security Council will analyse the mission’s situation regarding security in the field, affirming that “how to act in the future will be defined then, taking into account the decision already taken to reduce the size of MINUSTAH”. In this sense, he commented that a 40% reduction in the mission is foreseen for 2015.

Colonel Nasser Shahzad, Defence Adviser of the Permanent Mission of Pakistan to the United Nations, used his participation as an opportunity to pass on a message to Latin American countries thinking of incorporating themselves into peacekeeping forces. He pointed out: “we all need to be aware that it is not possible to do peacekeeping in a unilateral way”.

Admiral Bento Costa Leite de Albuquerque Júnior, General Director of the Inter-American Defence Board (JID), referred to the support brought by the JID to the Haiti’s White Book process. He highlighted that a gender focus was incorporated from the very beginning of the process 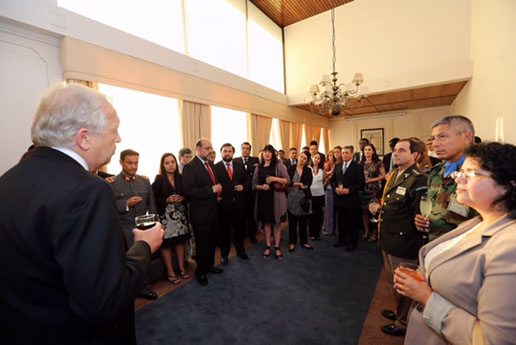 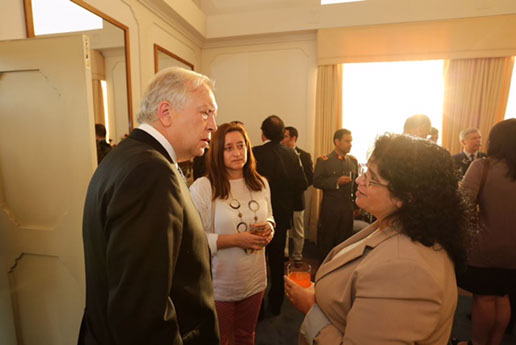 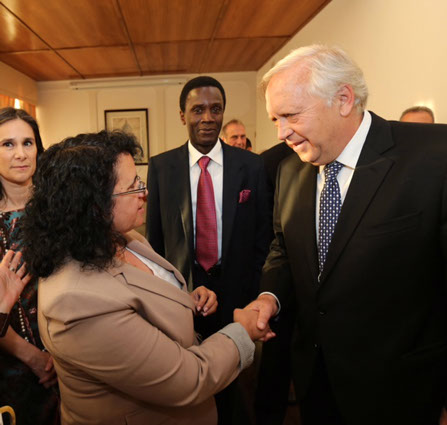 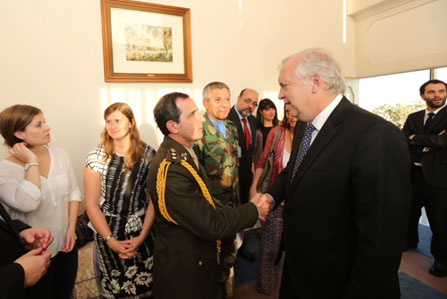 The Minister of Defence of Chile organised a reception to welcome all the participants of the international conference.