RESDAL at the Uruguayan National School of Peacekeeping Operations 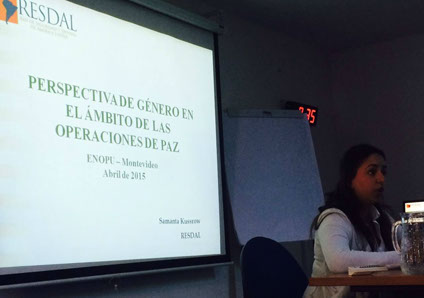 RESDAL expert Samanta Kussrow held a conference in Montevideo on Friday April 10 as part of the course "Women in the field of peace operations" organized by the Uruguayan National School of Peacekeeping Operations. Kussrow's presentation focused on how to incorporate a gender perspective into peace operations.

She noted the need for further progress in promoting women peacekeepers; further education and training on gender issues in the pre-deployment process; and gender mainstreaming in military planning to meet the needs of military personnel (men and women); among other points.

At the close of the presentation, the RESDAL expert listed a number of challenges in the field of women, peace and security that emerged as final recommendations at the international conference "Peace Operations: Insights from the South 15 years on from Resolution 1325" which took place last December in Santiago de Chile.

In this regard, she presented the need for a continuous updating of diagnostics, both on peacekeeping missions and their problems as well as the status of women. She stressed the need not simply to count the number of women but also the quality of the tasks they perform and insisted on the need for greater coordination between the ministries of foreign affairs and defense. She also stressed the importance of transmitting experiences and the need for more initiatives that foster exchange.

She noted the difficulties faced by peacekeepers to carry out their work when they are unfamiliar with the culture, language or religion of the communities in which these missions are deployed. Finally, she stressed - as a challenge that must be confronted - the distance between what is proposed from headquarters as guidelines for action and what can really be carried forward in practice.

The course, which was organized by the ENOPU, was attended by over 30 participants from the Brazilian Army, Uruguayan Ministries of Foreign Affairs and Defense, members of the Supreme Military Tribunal and the Uruguayan Army and Police. 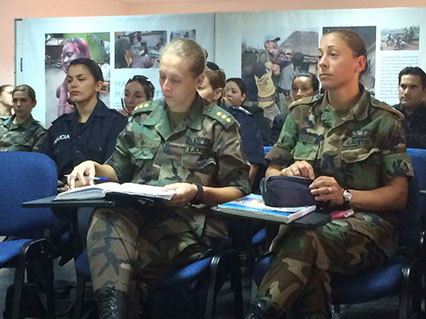