RESDAL contributes to transparency and cooperation mechanisms through multiple ways, strengthening its ties with regional and international institutions and facilitating the availability of data for public knowledge.

Hemispheric processes of cooperation and confidence building, such as the Conference of Defense Ministers of the Americas (CDMA), are constantly supported by RESDAL, facilitating dialogue between government representatives from the region and bringing the perspective of civil society. The organisation of thematic meetings in coordination with the Pro-Tempore Secretary of the CMDA, participation as an observer in both this and many other such meetings, and the international distribution of material, are examples of the commitment assumed in the field.

Another way of achieving progress in increasing transparency between countries and institutions is through the various publications produced by the Network, which compile, systematise and present information from official institutions (in many cases, publications are not only reliable data sources, but also have different thematic analysis). The ultimate expression of this cooperation in the exchange of information is the Comparative Atlas of Defence in Latin America and Caribbean. Comparative analytical work covering defence and security budgets and military training are other examples that complete the list.

Conference of Defense Ministers of the Americas (CDMA)

At the request of the Canadian organisers, RESDAL coordinated with FLACSO in the organisation of a consultation meeting with civil society, which was held in San José, Costa Rica in November 2007, and also published an updated Comparative Atlas of Defence that was distributed as official material at the VIII meeting (published in Spanish, English and French). For the IX Conference, and in coordination with the Secretary Pro-Tempore of Bolivia, two meetings were held in the city of La Paz; one with academics and one with representatives of the region’s governments, in which the organisers exchanged views regarding the thematic agenda. The Network also participated as a special guest at the “Jornada de intercambio de opinions sobre el contenido de la Agenda Temática” for the X Conference held in August 2012.” 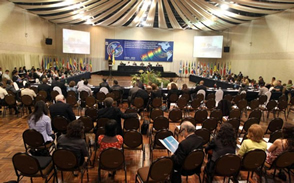 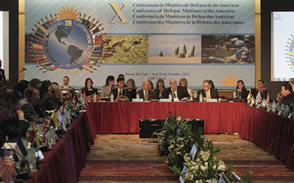 (along with regional experts and representatives of ministries of defence)

(along with civil society and academy representatives)