Provides the reader with an up-to-date and specialised view of perspectives on democratic governability in Latin America. It is distributed electronically to civilians and military in decision-making positions or that carry out research and investigation. It compiles:

- Context analysis carried out by RESDAL members in different countries.

If you would like to receive this newsletter by email, write us: consultas@resdal.org.ar

On March 11, 2020, the World Health Organization declared the new coronavirus SARS-CoV-2 outbreak a pandemic. By then, the virus was already spreading worlwide and had turned into a global problem. It was precisely the close connection between countries in a globalized world that caused an impact on so many people, across all continents, in such a short time.

Against this backdrop, as was already pointed out in the previous Newsletter, the armed forces were called upon to play a role in response to the crisis.

This first issue provides data on the contributions made by military forces across Latin America and the measures implemented in these different cases, with this accompanied by two opinion pieces: reflections on a post-coronavirus world, and African defense and security forces facing the COVID-19 pandemic.

It comes in the framework of the Global Community of Practice linking Latin America with other world regions such as Africa, Asia, Eastern Europe and the Middle East, through which work is being undertaken to provide cross-regional research into what is occurring in the security sector across different parts of the world. Subsequent issues will therefore incorporate information and analysis from other regions, examine the role of risk management systems, and the issue of domestic violence in crises.

A many-headed Hydra, a Chameleon of a Thousand Names

A spectre haunts the Middle East today: the spectre of an Islamist movement that no one knows how to classify (although unhelpful adjectives are abound) and whose name no one can agree on.

Newsletter RESDAL - The Question of the Military in Lebanon.

The Lebanese Armed Forces (LAF) are at the center of the security situation in Lebanon today. The support of central countries through an International Conference for assistance programs, the donation of four billion dollars from Saudi Arabia for the purchase of military equipment, and the operations carried out in the face of the advances of the Islamic State of Iraq and the Levant - ISIS - in the border zone with Syria, are some of the pieces that constitute the scene.

Presented here is the vision of a Latin American analyst with experience in the processes of the reconfi guration of military forces following the dictatorships, and the change in the regional and international scene produced by the disappearance of the internal and external Soviet empire.

The XI Conference of Defence Ministers of the Americas (CDMA) will be held in Arequipa, Peru (host country) in October 2014. This Conference was created in 1995 and since its inception has been organised every two years by a host country.

Although it is not a binding mechanism, since its creation the Conference generated a crescendo in addressing issues related to the strengthening of cooperation within the hemisphere, such as confidence-building measures, transparency with regard to budgets and conventional weapons, gender perspective in the armed forces, peacekeeping, and the role of defence in natural disasters, in addition to security concerns

In celebration of International Women's Day, and continuing RESDAL's dedication to promoting the role of women and the incorporation of a gender perspective into peace operations, we have created a special edition of the RESDAL newsletter, dedicated to the diffusion of some reflections on the theme of Women, Peace and Security, highlighting the ongoing opportunities and challenges faced in the incorporation of the issue at the operational level.

Newsletter RESDAL - Lebanon: A Remnant of the Ottoman Empire trying to Survive in a Region in Turmoil

Lebanon is the only multi-confessional country left in a region that is experiencing the collapse of the post-Ottoman order, the failure of the variegated experiments and formulas to create and sustain Arab States in the Middle East, the centrality of non-State actors, the proxy fight for supremacy between Saudi Arabia and Iran (with other regional players such as Turkey, Egypt and Qatar vying for influence), as well as the periodic escalation of the intractable conflict between the Palestinians and the Israelis. 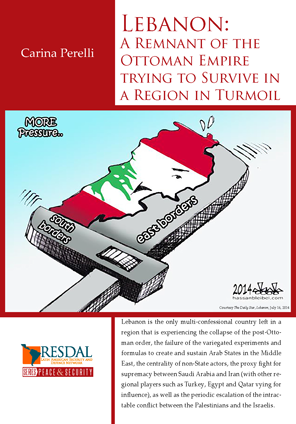